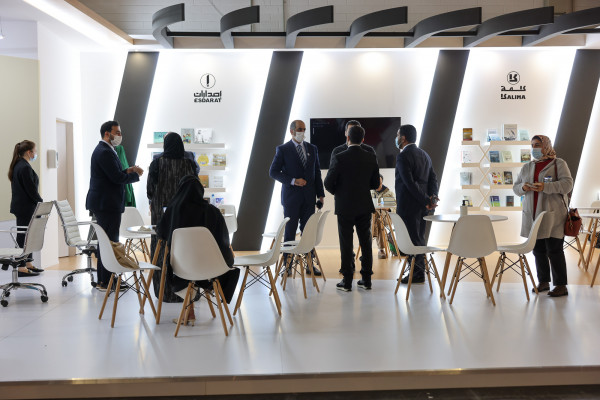 Under the theme â€œRe: Connectâ€, the premier literary and editorial event marked its 73rd edition with a physical fair that drew a large audience, a welcome return after last year’s virtual event.

During the fair, the Center signed key agreements, such as a Memorandum of Understanding with the University of Leipzig, and organized a number of special events, including the Abu Dhabi Translation Conference, held in margin of the fair, a series of book dedications at the Center pavilion, as well as several sessions organized by the Sheikh Zayed Book Award.

The Centre’s memorandum of understanding with the University of Leipzig, the second oldest university in Germany, will promote the exchange of cultural and linguistic experiences, the publication of research projects on Arabic language and literature and the production scientific reports on the state of the Arabic language. The agreement allows the two entities to take advantage of their respective research and teaching skills and to organize joint projects to promote the use of Arabic among students and researchers. It also aims to position the Arabic language as a language of creative, academic and scientific content.

Dr Ali bin Tamim, Chairman of the Abu Dhabi Arabic Language Center and Secretary General of the Sheikh Zayed Book Prize, said: â€œThe first participation of the Abu Dhabi Arabic Language Center in the Frankfurt Book Fair s ‘part of the continuity of our commitment to make significant contributions. at large-scale regional and international cultural events, which allows us both to promote the Center and the Arabic language, and to forge powerful links and partnerships with our peers around the world. ”

The Arabic Language Center also presented the latest publications as part of its flagship translation project â€œKalimaâ€, which includes German literary works translated into Arabic. The Center has signed additional bilateral agreements to acquire the copyrights of international publishing houses and translate their works into Arabic from English, French, German, Spanish and many others. languages.

Saeed Hamdan Al Tuneiji, Director of Creative Content Department at the Abu Dhabi Arabic Language Center, said: â€œThe Frankfurt Book Fair is a major annual event and one of the world’s leading literary and editorial initiatives. Our participation in the fair has provided us with a powerful promotional platform, offering enormous opportunities to enhance bilateral collaborations and strengthen partnerships. ”

The Sheikh Zayed Book Prize of the Arabic Language Center also participated in the fair, with a dedicated platform in the Centre’s pavilion where three interactive discussions took place, addressing several topics of interest to authors and publishers.

The first discussion, â€œThe Untapped Potential of Arab Literature,â€ explored why the works of many prominent Arab writers have yet to reach international audiences. The second session, â€œPublishing Arabic Books – Opportunities and Challengesâ€, explored the obstacles preventing the dissemination of Arabic literature in Western markets, the titles and topics of most interest to international readers, and strategies for promoting it. Arabic literature abroad. The third and final discussion, â€œIt’s Just a Children’s Book: The Complexity of the So-called Simple,â€ took a closer look at the importance of helping writers of children’s literature develop their skills.