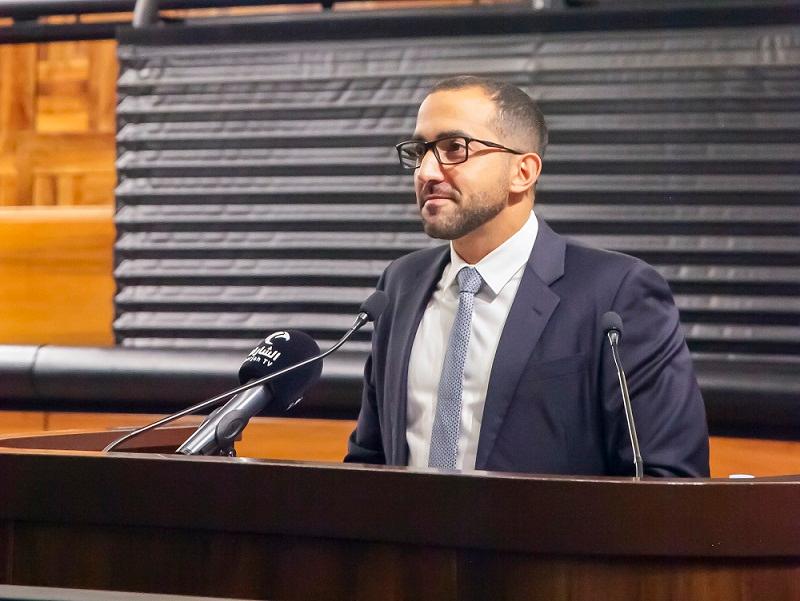 The Ruler of Sharjah’s cultural message to the world was conveyed by Sheikh Fahim Al Qasimi, Chairman of the Department of Government Relations (DGR) in Sharjah, during a keynote speech at the opening ceremony of the festival, hosted by the Catholic University of the Sacred Heart. in Milan in partnership with Sharjah Book Authority (SBA).

In his speech delivered on behalf of His Highness the Ruler of Sharjah, Sheikh Fahim Al Qasimi, said: “Our pride in language and national identity should not be isolated from the world. We must use them to forge meaningful cultural and linguistic dialogue and connections with the world based on mutual respect, understanding and equality.”

The President of the DGR added: “Respecting one’s own identity and understanding its importance in building the future also means respecting the identity of others. Language, everyone agrees, is a key component of our identity because it is a tool for self-expression, carrier of culture and heritage.”

Speaking about the efforts of the Ruler of Sharjah to support the Arabic language, Sheikh Fahim noted: “Through the Historical corpus of the Arabic language, His Highness the Ruler of Sharjah emphasized that our language is not just for us; it belongs to all humanity because it has influenced other languages ​​while being nurtured by them as well. These influences of our language on the world are evident in world art and literature, and even in spoken languages ​​and dialects.”

Ahmed Al Ameri: Sharjah is an ambassador of the Arabic language

For his part, HE Ahmed bin Rakkad Al Ameri, said in his opening speech: “We are proud to once again sponsor this important festival, which is the largest of its kind in Europe. In Sharjah, our work is guided by the vision of His Highness Sheikh Dr. Sultan Al Qasimi, which recognizes the importance of language in impacting the current reality and the future of nations.The vision also calls for constructive communication based on equality and awareness of one’s unique individuality, and stresses the importance of celebrating the commonalities between cultures and countries”.

The SBA Chairman added, “The beauty of a nation is truly revealed when a non-native is able to understand its language, because a language is not just a tool of communication, it is a mode of life. That’s why we are happy to open a wide window to Arabic culture from the heart of Milan, and we are happy that Sharjah is an ambassador of Arabic language and culture in the world.

Al Ameri continued, “Throughout its history, the Arabic language has made immense contributions to humanity, presenting the world with vast knowledge and awareness, laying the foundations of science, physics, astronomy, navigation, mathematics and even music. The Arabic language was the gateway through which the world entered the era of contemporary civilization, and the path taken to the most significant renaissance through the ages.”

Franco Anelli, President of the Catholic University of the Sacred Heart, said: “We thank Sharjah for its continued efforts in favor of intercultural dialogue, and we also thank the Sharjah Book Authority for its continued support in advancing the vision and message of the festival. We are pleased that this year’s edition of the festival is dedicated to celebrating the Historical corpus of the Arabic languagewhich Sharjah worked under the supervision of His Highness the Ruler of Sharjah, and which today represents a significant achievement not only for the Arabs but for the whole world, due to the monumental effort of documentation of one of the oldest and richest languages ​​in the world.”

He added: “In this edition of the festival, we look at the impact of « Historical corpus of the Arabic language‘ in promoting common values ​​between Arab and European cultures and supporting communication between civilizations. We see Sharjah as the gateway to strengthening our relationship not only with Emirati culture but also with Arab culture. »

“All languages ​​are related in one way or another”

For his part, Giovanni Gobber, Dean of the Faculty of Linguistic Sciences and Foreign Literature at the Catholic University of the Sacred Heart, said: “For academics, the Arabic language is considered one of the most important languages and we are constantly researching We believe that all languages ​​are related in some way. There are relationships between them, some of which are known and others waiting to be discovered.

The dean added: “As Italians, we feel a sense of belonging to the Arab civilization, and we are proud of what connects us to it and of our close ties with this magnificent culture and language.”

In turn, Dr. Wael Farouk, professor of language, Arabic literature and Islamic studies at the University, expressed his pride in working at the Catholic University and stressed that no other university outside the Arab world don’t provide as much time and resources to academics.

A video shown during the opening ceremony documented the different development phases of the Historical corpus of the Arabic languageand the ceremony ended with a musical performance by the university’s Arabic language students.

Led by the university’s Arabic Language Research Institute (CARA) and the Center for Language Services (SeLdA), the festival also featured an exhibition of Arabic books, where SBA presented a selection of works by Emirati and Arab authors.

The three-day festival hosted a series of cultural events and activities, and witnessed several panel discussions led by experts that highlighted the Corpus’ key offerings and its development journey.