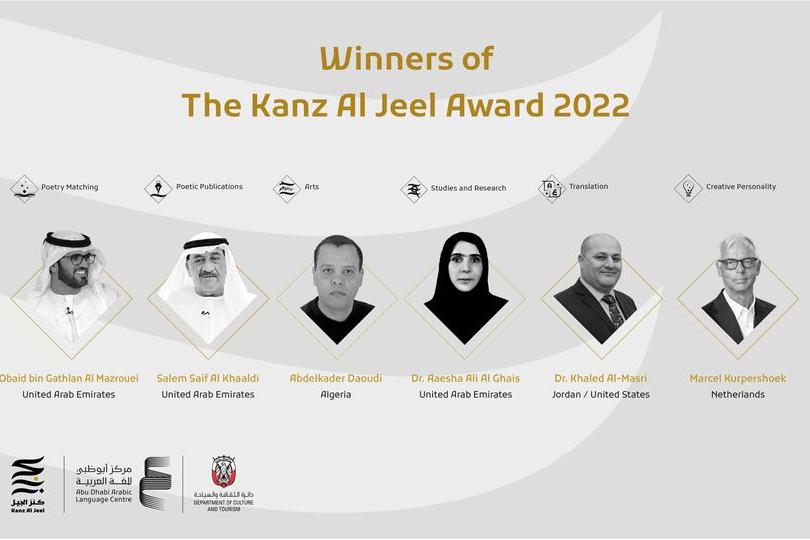 The winners will be presented at a ceremony at the Zayed Central Library in Al Ain on November 16 at 6 p.m. during the Al Ain Book Fair 2022 (November 14-20).

Launched earlier this year by ALC, part of Abu Dhabi’s Department of Culture and Tourism, the award celebrates the legacy of the increasingly popular tradition of nabati poetry. The committee received a total of 234 submissions from 20 different countries in six categories.

The winners of the Treasured Sayings Award 2022 are:

His Excellency Dr. Ali bin Tamim, President of the Arabic Language Center Abu Dhabi, warmly congratulated the winners of the first edition, wishing them continued success. He said: “The Treasured Sayings Prize is an inspirational cultural prize that stimulates literary creativity in the country and region and celebrates the important poetic contributions of the late Sheikh Zayed bin Sultan Al Nahyan and his influence on contemporary Arabic poetry. The Treasured Sayings Prize will have a great impact on motivating creators from various fields to present quality works inspired by or related to Nabati poetry and its heritage, and to explore new and innovative ways of experimenting with poetic compositions.

Eissa Saif Al Mazrouei, Chair of the Higher Committee of the Precious Sayings Award and Vice Chair of the Abu Dhabi Cultural and Heritage Programs and Festivals Management Committee, highlighted the resounding success of the first cycle of the award. He particularly underlined the wide participation of the participants in various fields of literature and from all over the world. He said: “This confirms the originality and importance of the poetic and literary work of the late Sheikh Zayed bin Sultan Al Nahyan, who established an important hub for creators, translators, artists and critics of different nationalities and ethnicities, and contributed the launch of a new creative movement that enriches the literary scene and reflects the noble values ​​rooted in Emirati society.

Al Mazrouei also congratulated the winners of the first edition, expressing his appreciation for their outstanding contributions and creative works, and inviting authors around the world to participate in future editions of the prize.

About the Kanz Al Jeel Award

The Kanz Al Jeel (Precious Sayings) Award was launched in 2022 by the Arabic Language Center Abu Dhabi (ALC) which is part of the Department of Culture and Tourism Abu Dhabi. The prize was inspired by the visionary poetry of the founding father of the United Arab Emirates, the late Sheikh Zayed bin Sultan Al Nahyan, and it aims to elevate poetry, and in particular Nabati poetry, and to highlight its role as a mirror of the society. The award includes six categories: Poetry Correspondence, Arts, Study and Research, Poetical Publications, Translation and Creative Personality. The total prize pool is AED 1.5 million, with AED 500,000 awarded to the Creative Personality winner and AED 200,000 awarded to each of the winners in all other categories.

About the Al Ain Book Festival

Founded in 2000 under the patronage of the Abu Dhabi Arabic Language Center, the

The Al Ain Book Festival – formerly known as the Al Ain Book Fair – celebrates Al Ain’s rich cultural heritage and the inspiring work of Emirati writers, intellectuals and creatives, past and present. Renamed in 2022, the Festival offers a diverse program that aims to foster the culture of reading and inspire people to connect with Emirati heritage, culture and creativity by bringing Emirati stories to life through poetry, performance , cinema and music for everyone, especially young people. people.

The Abu Dhabi Arabic Language Center, established following a directive from His Highness Sheikh Khalifa bin Zayed Al Nahyan, President of the United Arab Emirates and Ruler of Abu Dhabi, under the Ministry of Culture and Abu Dhabi Tourism, works to support the development and modernization of the Arabic language through comprehensive strategies that aim to enrich the academic, educational, cultural and creative contributions of the Arabic language, promote Arabic language proficiency and cultural understanding, support Arab talent in writing, translation, publishing, academic research, arts and content creation, and create inspiring events including book fairs, all thanks to dedicated programs and meaningful partnerships with the most prestigious technical, cultural and academic institutions in the world.

About the Department of Culture and Tourism – Abu Dhabi

The Abu Dhabi Department of Culture and Tourism (DCT Abu Dhabi) drives the sustainable growth of Abu Dhabi’s culture, tourism and creative sectors, fuels economic progress and helps achieve global ambitions more off Abu Dhabi. By working in partnership with the organizations that define the emirate’s position as a leading international destination, DCT Abu Dhabi strives to unite the ecosystem around a shared vision of the emirate’s potential, coordinate efforts and investments, to propose innovative solutions and to use the best tools, policies and systems to support the culture and tourism industries.

DCT Abu Dhabi’s vision is defined by the people, heritage and landscape of the emirate. We work to enhance Abu Dhabi’s status as a place of authenticity, innovation and unrivaled experiences, represented by its living traditions of hospitality, pioneering initiatives and creative thinking.