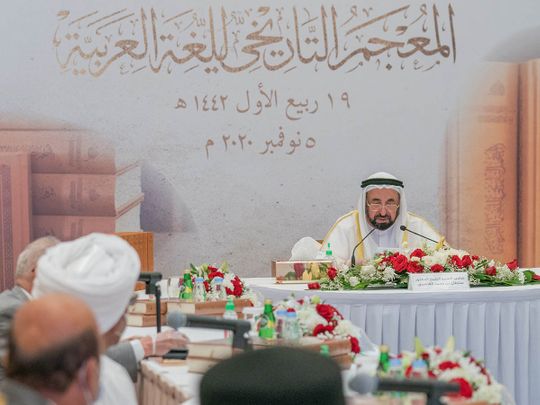 Sharjah: His Highness Sheikh Dr. Sultan bin Muhammad Al Qasimi, member of the Supreme Council and Sovereign of Sharjah, on Thursday released the first eight volumes of the Historic Corpus of the Arabic Language at the 39th Sharjah International Book Fair.

This one-of-a-kind project chronicles 17 centuries of development of the Arabic language spanning five distinct periods of history, from the pre-Islamic period to the Islamic era, the Abbasid caliphate, the development of nation states and the modern times.

The corpus will provide detailed documentation of word roots, derivatives and phonetic variations. The history of each derived word will be traced back to the first known usage from pre-Islamic times to the present day. What makes the corpus unique is that it focuses on the use of a living language and cites usages in quotes from the Holy Quran, hadiths as well as poems, speeches, letters and other sources.

Attempts to record the development of the Arabic language date back to 1936 but were blocked soon after the completion of some of the first letter (hamzah) entries. With the release of the books, Sharjah became the first city in the world to complete more than 80 years of study.

Sheikh Sultan said: â€œOn this blessed day, I would like to say to the united Arab and Muslim nation: Congratulations! The first eight volumes of the corpus, covering the first two letters of the alphabet, are published. And we promise you that, in the coming years, we will publish dozens of volumes that will allow Arabic language learners, enthusiasts and academics to benefit from the largest linguistic repository ever developed.

â€œThis project has been stuck in my head for a long time, and my desire to support it grew when I learned that previous attempts were unsuccessful for various reasons. Succeeding in our endeavors was what I asked in my prayers to Allah, and I always pray, seeking divine guidance for the success of this huge project.

â€œPraise be to Allah, we were able to overcome all the obstacles and challenges that this project faced. What was a dream, a wish, 80 years ago has become a global reality, thanks to the generosity of Allah and the unwavering perseverance of the sincere researchers who worked on the project, â€continued the ruler of Sharjah.

Sheikh Sultan also thanked Arab researchers and academics. “I would like to sincerely thank everyone who is part of the Historical Corpus of the Arabic Language project, in particular Dr Hassan El Shafei, President of the Union of Academies of Arab Scientific Languages, and all other linguists and scholars of the Union. . Thank you to all the members of the Scientific Council, as well as to my sons and daughters – editors, linguists and experts – working within the executive committee of the Academy of the Arabic language. May Allah grant you the best reward, â€he said.

The first eight volumes document the origin of the first two Arabic letters – hamzah and ba from the pre-Islamic period, the Islamic era from 1 AH to 132 AH, the Abbasid caliphate from 133 AH to 656 AH, the development of the nation states of 657 AH – 1213 AH, and the modern era from 1214 AH to the present day.

The volumes trace the evolution of Arabic words used through the centuries, document the entry of new words into the lexicon and also list words that are no longer used to explain the reasons. It also details semantic changes, progression, development or drift, whether through Arabic speakers or speakers of other Semitic languages â€‹â€‹such as Hebrew, Akkadian, Syriac, Abyssinian and others, who have influenced the Arabic language.

Dr Mamoun Wajeeh, scientific leader of the project, said the preparatory period for the development of the corpus took more than two years.

Hundreds of senior researchers and linguists, editors and experts from 10 Arabic language academies across the Arab world have collaborated on the project. Under the supervision of the Union of Academies of Arabic Scientific Languages â€‹â€‹in Cairo, Egypt, and with the Academy of Arabic Languages â€‹â€‹in Sharjah managing the project executive committee, the team is working to complete the entire corpus within a deadline. estimated at six years.

The Historical Corpus of the Arabic Language has used a database of sources collected and digitized over the past three years. In addition to the printed volumes, the project also digitizes nearly 20,000 books, manuscripts, sources and historical Arabic documents, including ancient inscriptions and archaeological finds, dating from the third century before Islam.