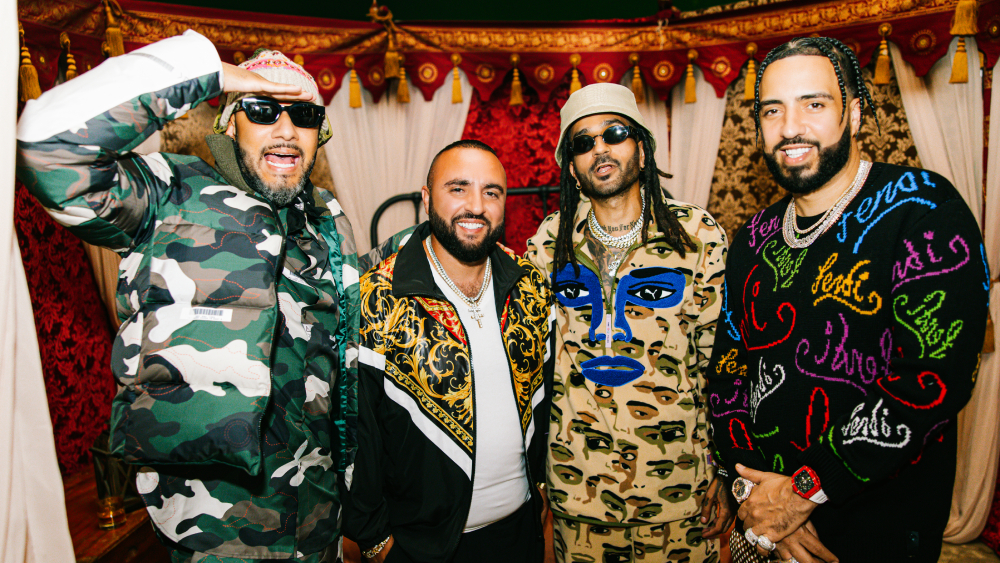 Los Angeles-based Saudi/American singer-rapper-producer $kinny has released his new album, “Have a Nice Trip”, which was produced by Swizz Beatz, on Universal Arabic Music.

The album features his new single “Salam” featuring Swizz Beatz and French Montana, the video for which was also released today (pictured above during the video shoot, LR are UAM CEO Swizz Wassim” Sal” Slaiby, $kinny and Montana).

$kinny grew up in Los Angeles as the child of an American mother and a Saudi father, and his music is relevant to both cultures. Swizz Beatz has spent a lot of time in the Middle East over the past few years, and it’s been an easy match.

“It’s crazy, Swizz and I said ‘Salam’ the day we met,” says $kinny Variety. “He posted a video on Instagram listening to one of my songs and tagged me. We exchanged a few messages and he was like, ‘Are you in LA? I’m in the studio.’ So I stopped and we just vibed for hours We played records we talked about life just real organic shit Later that night he played me a beat that he had and he started singing the hook like that, and the rest is history.

“For me, ‘Salam’ is just an embodiment of who I am as an artist, blending my two cultures and bringing Eastern and Western cultures together through music,” he continues. “That’s what this album is about, putting my spin on things and bringing a new perspective to the Hip-Hop game. I mean Swizz Beatz speaks Arabic there.

$kinny started releasing music in 2015 and his “Late Night Blvd”. Two years later, the EP featured Freddie Gibbs and Ice T. But his album “Thank You for Nothing” established him, topping the Apple Music charts in the Middle East; he followed this with production work on Belly’s “See You Next Wednesday”.

Swizz tells Variety, “I first heard about $kinny from a friend in Saudi Arabia and then found it on Instagram. Being the executive producer of “Have a Nice Trip” was easy because $kinny is super talented. He’s not just an artist, he writes and produces, which made the process even better!! What I preferred in the creation of ‘Salam’, it is the energy of the disc. I know it will clear!!

“UAM just turned one year old!” he adds. “We are about to announce great collaborations merging major Arab and global artists to create the new sound we are developing. We also want to incorporate global brands and partnerships with Arab culture.”