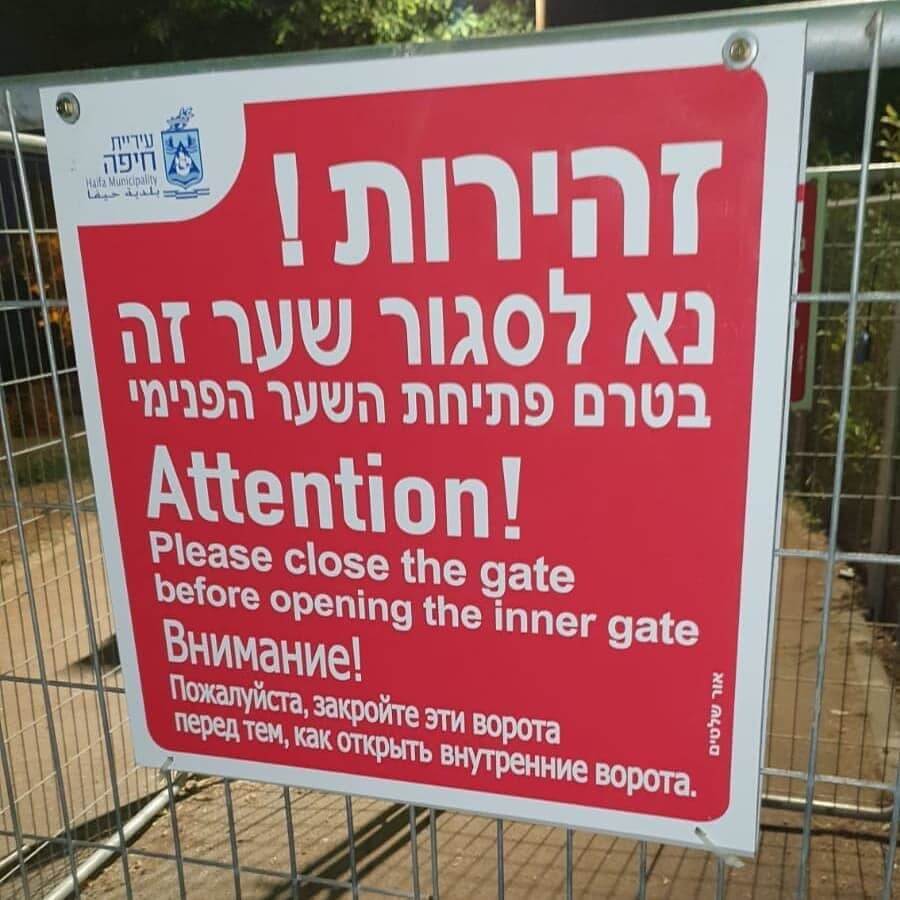 Two days ago in Haifa, a city where Palestinian Arabs make up 10% of the population, the municipality placed a sign in one of the parks in the French Quarter of Carmel to remind people with dogs to close the doors. . The sign is written in Hebrew, English and Russian, but not in Arabic, thus excluding Arabic-speaking Palestinian residents who live in the neighborhood.

Recently, attempts have been made to undermine the status of the Arabic language as an official language in Israel despite the fact that 1.5 million Arabic speakers – 21% of the population – suffer from systematic marginalization and discrimination, linguistic and otherwise. This situation is reflected in many spheres of a Palestinian Arab individual’s life, whether in academia, the economy, or even in day-to-day affairs like going to the post office or to the doctor. Hebrew and English are the most dominant and Arabic is practically nonexistent.

In 2004, Dr Ahmad Tibi, member of the Israeli Knesset, asked the Supreme Court to add signs in Arabic at Ben Gurion International Airport. However, it wasn’t until a month ago in 2021 that the airport management – after a long battle with Sikkuy (Association for the Promotion of Civic Equality) – installed a new welcome sign that includes Arabic.

During the coronavirus pandemic, Palestinian Arabs in Israel faced various challenges, including language barriers, which made it difficult for their ability to implement instructions and guidelines from the Ministry of Health. A significant delay in the government’s release of instructions in Arabic resulted in serious gaps in the level and scope of information reaching much of the Palestinian Arab public. For example, the “Traffic Light” website which was set up by the Ministry of Health to notify the public of any updates regarding COVID only contains titles in the Arabic language, but when a person tries to type the full article, website will take you to the Hebrew page. The “Traffic Light” problem reflects a documented problemd in research conducted by the Knesset Information Center in 2016, which revealed that only parts of government website pages are accessible in Arabic.

The Mossawa Center – The Advocacy Center for Arab Citizens in Israel sent numerous letters to various government institutions during the pandemic, including National Security, demanding that they provide Arabic content to the public. When there was minimal response, the Mossawa Center, along with other civil society organizations, took it upon themselves to translate much of the important content to the Arab audience.

According to a new study, 60% of museums in Israel do not have service or access to information in Arabic. The study, conducted by attorneys Hanan Margia and Idan Ring, looked at metrics such as signage, website, Facebook advertising and marketing, newsletters and cards, videos, presentations, and audio guides. . According to the results of the study, in 12 of the 20 museums examined, there is no Arabic at all, or the presence of the language is minimal and mainly includes signage referring to exits, entrances and services. .

For many years, the Mossawa Center asked the Municipality of Haifa to renovate one of the old buildings in the historic district of Wadi Alsaleeb and turn it into an Arab museum. To date, Palestinian Arab society in Israel does not have its own museums or a cinema that shows films in the Arabic language. The request for the Mossawa Center may meet not only a cultural need of Palestinian Arab society, but also a financial need. By renovating beautiful abandoned buildings in Palestinian Arab neighborhoods, it opens the door for businesses to settle in the region, providing a solution to the unemployment problem and lifting families out of poverty.

Reducing poverty rates may be the answer to the big question the government fails to answer these days: how to stop crime rates and the black market in Palestinian Arab society. It all starts with recognizing first and foremost the Palestinian Arabs, their culture, their heritage and their language.

So where are the Palestinian voices in the mainstream media?

Mondoweiss covers the full picture of the struggle for justice in Palestine. Read by tens of thousands of people each month, our truth journalism is an essential counterweight to the propaganda that passes for news in mainstream and traditional media.

Our news and analyzes are accessible to everyone, which is why we need your support. Please contribute so that we can continue to make the voices heard of those who defend the rights of Palestinians to live in dignity and peace.

Palestinians today are fighting for their lives as the mainstream media turns away. Please support journalism that amplifies urgent voices calling for freedom and justice in Palestine.

2021-07-27
Previous Post: A path to reducing learning poverty in the MENA region
Next Post: Why Jordan is leading the way in Arabic language training