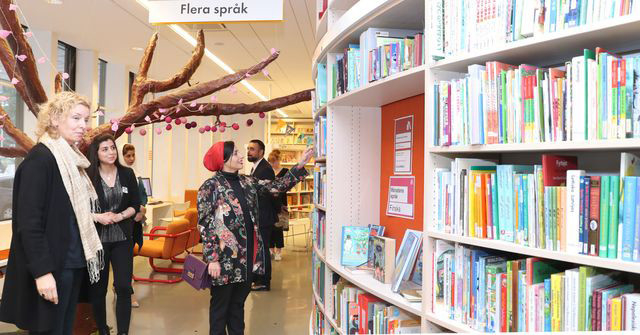 The event was organized in coordination with the foreign languages â€‹â€‹section of the Stockholm Public Library – known as the International Library – which will distribute the books to 25 libraries across Sweden, the initiative to better connect children Arabs in Sweden with their mother tongue.

Arabic has become the second most spoken language in Sweden, supplanting Finnish which has held this position for hundreds of years. According to the Swedish Central Bureau of Statistics, the Syrian community is the largest of the Arab diaspora in Sweden, numbering 158,000 people, followed by the Iraqi community, estimated at 136,000 people.

Shaikha Budoor Bint Sultan Al Qasimi, Founder and President of the Kalimat Foundation, said that providing Arab immigrant and refugee children with books written in their own language strengthens their national identity and ensures emotional communication with their country of origin.

She also visited the Gothenburg Library, where she was introduced to the various sections and publications of the library that are offered to her visitors, in addition to the book selection process and activities organized to promote reading to the public.

Shaikha Budoor said: â€œArab readers who live in non-Arabic speaking countries are hungry for books and titles published in their region. This is where the Kalimat Foundation comes in, because it is committed to providing children with materials with which they can engage and which strengthen their capacities. This role stems from the foundation’s firm belief in the power and influence of books as a source of knowledge that can open channels of dialogue and lay a solid foundation for the promotion of peace, love and harmony.

Fatin Dierki, chief librarian of the Stockholm International Library, expressed appreciation for the significant addition of titles, with the books being received at the Gothenburg City Library in conjunction with the Gothenburg Book Fair and Libraries. From there, a collection of books will be distributed to libraries in western Sweden.

Diekri said: â€œWe thank the Kalimat Foundation for supporting our library with these books, which will be available for all Arab children in Sweden to read. The International Library supports public libraries all over Sweden with titles in different languages â€‹â€‹and different cultures.