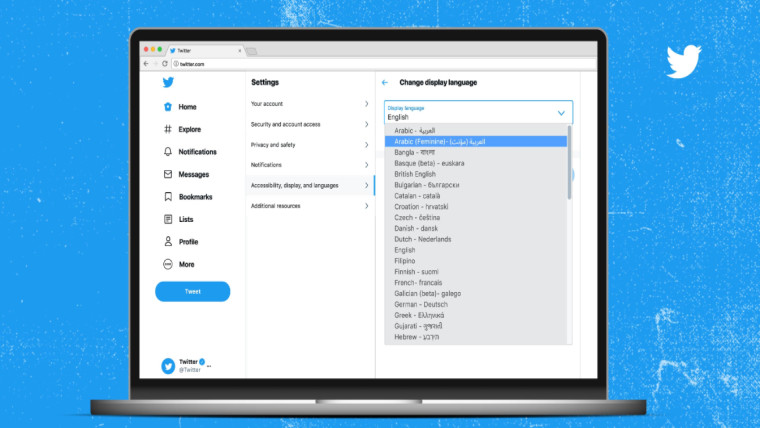 Twitter has constantly tested and added new features to its service over the past few months, including a Blue premium subscription, web spaces, a Revue newsletter signup button (subscribe to the Neowin newsletter here!) on profiles, and more. Now he announced that he was added new Arabic language setting to support female forms.

Twitter says that several languages â€‹â€‹support male and female word forms, including Arabic, so in order to respond to the latter as well, it is adding a new language “Arabic (female)” to its platforms. People who choose this setting will be addressed in the feminine form of Arabic words, with examples being “Tweet”, which will change from ØºØ±Ù‘Ø¯ (masculine) to ØºØ±Ù‘Ø¯ÙŠ (feminine), and “Explore”, which will change from Ø¥Ø³ØªÙƒØ´Ù (masculine) ) to (feminine).

Twitter believes this will make its platform more inclusive, especially for people who speak Arabic. To this end, it has also launched a campaign titled “#FeminineArabic Ø£ØªØ­Ø¯Ø«_Ø¨Ø§Ù„Ù…Ø¤Ù†Ø« #” which also triggers a new emoji when using. The company went on to say that:

We are committed to using inclusive language on Twitter, whether written, displayed on our site and apps, or embedded in our code. We know there is still work to be done to ensure our service reflects the variety of voices around the world, and we will continue to share what we learn and how we update Twitter based on your feedback.

Currently this language setting can be enabled from Settings and privacy> Accessibility, display and languages> Languages on the Web. The company also plans to roll out support for its Android and iOS apps soon.

2021-06-16
Previous Post: Abu Dhabi Arabic Language Center forms key partnership with Brill Publishing House
Next Post: A new way to respond to the learning crisis in the MENA region by advancing the teaching and learning of the Arabic language