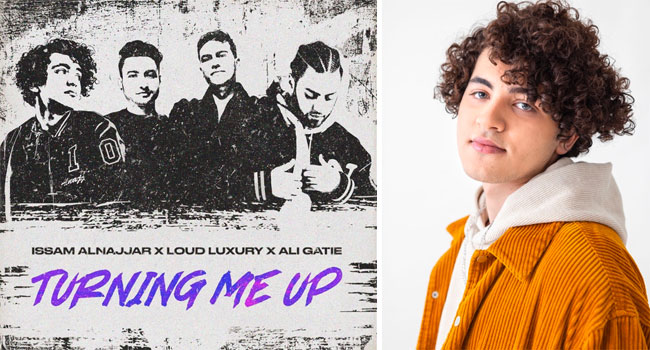 Expanding the scope of their groundbreaking anthem, Alnajjar recruited Canadian multi-platinum and diamond dance music duo Loud Luxury to reinvent the track, picking up the tempo and adding dance-ready house rhythm. He also brought in multi-platinum Iraqi-Canadian singer and songwriter Ali Gatie to provide an undeniable guest seat, elevating the song to a whole new level.

â€œ’Hadal Ahbek’ was a turning point in my career. To have the chance to revisit it in English with Ali Gatie and Loud Luxury is insane, â€says Alnajjar.

“‘Turning Me Up’ is by far the most unique record we’ve ever worked on,” add Andrew Fedyk and Joe De Pace of Loud Luxury. â€œThis is our first chance to take our sound and inject it with an international touch. Between working with Issam, who is halfway around the world, and Ali who happens to be from the same hometown, this song is meant to break down borders.

Alnajjar recently released the official video for his debut single “Hadal Ahbek”, which has already racked up more than five million views on YouTube in just a few weeks. Universal Music Group and Republic Records have teamed up with SALXCO and XO RECORDS Founder and CEO Wassim â€œSALâ€ Slaiby, and announced the launch of Universal Arabic Music (UAM) earlier this week. UAM is a new label dedicated to discovering, presenting and promoting the artists, sounds and rich musical culture of the Middle East and North Africa (MENA) region to audiences around the world. UAM marked the launch by announcing Issam Alnajjar as its first artist to sign.

To celebrate the release of “Turning Me Up (Hadal Ahbek)”, Issam will perform live on TikTok Sound Off today (Friday, April 9) at 3 p.m. EST.

The 17-year-old singer, songwriter and guitarist made history with “Hadal Ahbek” as it was the first Arabic song to explode worldwide as the # 1 viral hit. Along with racking up over 30 million Spotify streams and three billion audio views on TikTok, it has climbed numerous global rankings and been added to notable playlists since its release. Upon release, the track peaked at # 1 on Spotify’s US and Global Viral 50 charts and Shazam’s Top 200 Global Chart, as well as # 17 and # 20 on both Global Hits and Viral Hits playlists. from Apple Music, respectively. The song won spots on Spotify’s Pop Rising, Viral Hits, Teen Beats and RADAR playlists. Internationally, it reached No.1 on Spotify’s Viral Rankings in 25 local markets, including UK, Canada, Germany, France and Mexico, and No.1 on Shazam’s Top 200 Chart. in 24 local markets. In the MENA region, the track peaked at # 3 on Apple Music Pop charts in Jordan and Lebanon, # 5 on Apple Music Pop charts in Egypt, # 3 on Spotify’s daily chart in Saudi Arabia, # 3 of the Deezer ranking in Lebanon. , No. 7 on the Deezer UAE map and No. 7 on the Deezer Tunisia map. â€œHadal Ahbekâ€ live performance video has over 60 million views on YouTube.

â€œHadal Ahbek,â€ which translates to â€œI will continue to love youâ€ in Arabic, first became an internet sensation after Alnajjar posted a clip of the track on Instagram. After achieving initial success and amassing over 10,000 subscribers and 12,000 views overnight, he created a fan challenge with the song on TikTok, which ignited it worldwide. The irresistible bop has arrived as a transcontinental anthem and cements Issam Alnajjar as an international artist to watch in 2021.

2021-04-09
Previous Post: Weeknd Manager launches Arab music label with Universal and Republic
Next Post: Arabic language source documents on the Armenian genocide are now available on the website of the Armenian National Institute